In addition to the Tim-Abdullah Khan Trade Dome, there are three other covered bazaars in the historic core of the UNESCO World Heritage city of Bukhara that should be on your radar, and once they are, will be impossible to miss since you’ll know what you’re looking at.  Established during the late 16th century, these covered markets were designed to protect both merchants and shoppers from the elements, in essence becoming the world’s first shopping malls.  Unlike the Tim-Abdullah Khan, which is set off the road in a stand-alone building, the other three are situated such that the main road itself is covered, forcing travelers to navigate through stalls as they make their way through the city.  While this was an ingenious tactic to boost sales, it didn’t necessarily help the traffic situation.

Toqi Telpa Furushon, which is located in a place where five ancient roads meet, is situated today at the end of a roundabout across the road from the modern Asia Bukhara Hotel, where taxis and busses full of tourists disgorge their contents directly into the city center.  Obviously today the streets passing through the covered bazaar are pedestrian only, but location was just important then as it is now, and merchants still take advantage of the traffic bottleneck.  Located on the main drag between the Lyabi-Hauz and the Kalon Minaret and Mosque, this is primo real-estate for shopping, and prices reflect this.  When it was built at the end of the 16th century, this covered bazaar specialized in selling books and manuscripts. It was known then as Toqi Kitob (Uzbek kitob for “book”), but today’s name refers to the hat makers which replaced the booksellers, so today the market is also known as the cap sellers bazaar. 21st century travelers however are more likely to find carpets, susani, and tourist souvenirs, rather than practical headwear.

Toqi Zargaron Bazaar is another covered trade dome located a bit further up the road from Toqi Telpa, just past the Tim-Abdullah Khan Trade Dome, at a junction in the road where travelers turn right to access the Abdualaziz Khan Madrassa, or left to continue on towards thePo-i-Kalyan Ensemble.  Toqi Zargaron is not only the largest covered trade dome in Bukhara occupying an area of 43 x 45 meters, it was also the first.  Built in 1569, it contained 36 workshops in its heyday all occupied by goldsmiths and jewelry sellers.  Today the trade dome and the area around it are undergoing extensive renovations that don’t always use traditional materials as required by Bukhara’s world heritage protected zone.  The renovations mean tourism is booming, but the cost to authenticity is clearly evident in this part of town.  Like the other trade domes in the historic core, this one no longer serves any practical purpose for locals and instead has also caved to the pressure of tourism by offering handicrafts and souvenirs.

Toki Sarrafon is the southernmost of the trade domes in the historic core, located at the southwest corner of the Lyabi-Hauz main square.  The main road passes under the dome where in the 16th and 17th centuries, money changers gathered to exchange currency with merchants and travelers from along the silk road.  The name of Toki Sarrafon comes from the world sarraf which means “money changer”.  Not as trafficked as the trade domes, travelers today passing through the bazaar head this way in search of the Mausoleum Turki Jandi, and a few hotels within the western zone of the UNESCO protected historic center.  Our favorite place to stay in Bukhara, the Hotel Hovli Poyon, is just another 300 meters down the road.

The trading domes of Bukhara offer travelers a unique glimpse to a bygone era when people did their daily shopping on the street.  As the economy improved in the ancient silk-road city, so did conditions for shoppers and merchants alike, as a generous Abdualla Khan II built comfortable shopping passages to showcase the best products of the most successful economic era for Uzbekistan since Amir Timur.  Not all the trading domes survived the centuries that followed, but the four which remain still more or less serve their original purpose. 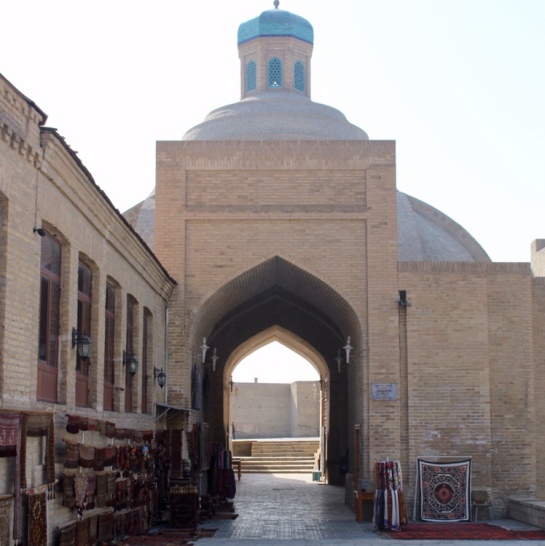